Melanocortin receptors are a group of G protein-coupled receptors, the effects of the melanocortins – melanotropins (MSH) and adrenocorticotropic hormone (ACTH) – continues communicate. There are five of these previously known receptors MC1R abbreviated to MC5R may be discovered even more:

Melanocortin-1 receptor The melanocortin receptor 1 (MC1R) belongs to the melanocortin receptors and is a human gene locus on chromosome 16 Q24.3 encoded transmembrane G protein-coupled receptor, which is expressed in melanocytes and controls skin tanning. There are over 30 different receptor alleles that determine the skin type (skin sensitivity to radiation and sunburn). A specific mutation leads to hereditary susceptibility to malignant melanoma. The locus of this receptor is called the Extension locus.

Melanocortin 2 receptor The melanocortin 2 (short: MC2R, or alternatively, ACTH receptor, in short ACTHR or Corticotropinrezeptor) is expressed in the adrenal cortex and mediates the effects of ACTH. It is a G-protein coupled receptor of the family of melanocortin receptors. MC2R in humans is encoded on the chromosome segment 18p11.2 and contains 297 amino acids. Mutations of the MC2R lead to infrequent family cortisone deficiency type 1, which is resistant to ACTH.

Melanocortin-3 receptor The melanocortin 3 (abbreviated MC3R) belongs to the group of melanocortin receptors and is a G-protein-coupled receptor. He is in the brain (there especially in regions of the hypothalamus near the organum vasculosum laminae terminalis), placenta, the intestinal tissue but not expressed in the adrenal cortex or in melanocytes. It is activated by α-MSH, β-MSH, γ-MSH and ACTH, and involved in autonomic regulation of Energiehomösostase for example in the suppression of the febrile response, or to influence the utilization of food with reduced Körperfettanlagerung and counter-regulation with the metabolic syndrome (see OMIM). The MC3R is encoded on the chromosomal region 20q13.2-q13.3 and contains 360 amino acids.

Melanocortin-4 receptor The melanocortin 4 (short: MC4R) belongs to the group of melanocortin receptors and is a G-protein-coupled receptor. He is in the brain (there especially in regions of the hypothalamus near the organum vasculosum laminae terminalis) and in the intestinal tissue but not expressed in the placenta, adrenal cortex or in melanocytes. It is activated by α-MSH, β-MSH, γ-MSH and ACTH and is involved in autonomic regulation of energy homeostasis. It stands as the normal body temperature, but suppresses the febrile response. He also suppresses the appetite (for example, in the context of cancer cachexia) and affects the energy consumption in the metabolism and increases sexual desire disorder. The protein for MC4R is encoded on chromosome 18q22 section in an exon and contains 333 amino acids. Mutations in the MC4R may also be associated with heterozygotes with autosomal inherited predisposition to obesity. 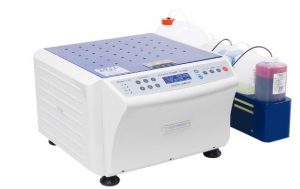 Stop hard Manual staining. Exact results from all medical laboratories in the world!

Specimens according to GRAM staining method by automated system control.

staining or automated dip-type stainers, include simplicity and convenience.

It can be provide safety and comfortable environment of test lab.

Can be used by simple operation and it can be available to obtain accurate and precision stain.